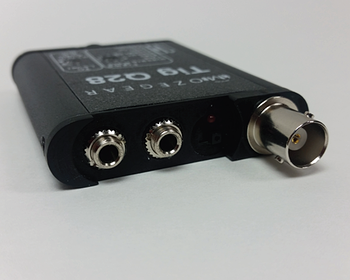 The usual iteration process with tech is more features in a smaller form factor. While the new TIG is certainly smaller and lighter, it offers the same features as the original model. This is a good thing. The primary appeal of the TIG (beyond the audio output/mix feature) was its small form factor relative to the other leading TC boxes. The Q28 is smaller still, meaning less weight on the small cameras that it can enable timecode upon.

The first version of the Q28 used a Lemo for TC IO. While the Lemo is a common standard, it’s used less often than the BNC. The BNC may offer less functionality per millimeter of chassis real estate in that it is unidirectional, but it has the advantage of a very affordable, commonly available cable. This means that the new Q28 can be integrated into most existing kits without having to either replace or augment a cable package.


As you can see (or not), it almost disappears, Predator-like, into a modern camera build. I can tell you that during this test, the rather non-compliant BNC weighed more than the TIG itself, and kept lifting it off the camera body.

As mentioned, this model offers the same feature set as the original TIG (my review of which you can read here), so I won’t bother rehashing those. This is mainly to demonstrate its new svelte design. As cameras get smaller and lighter (and ACs get bitchier...JK, LUV U!), rigs become more elaborate. Any size and weight savings will be appreciated, and the TIG Q28 is a barely-there sync solution.