Behind the Cadelabra...There's a Mic 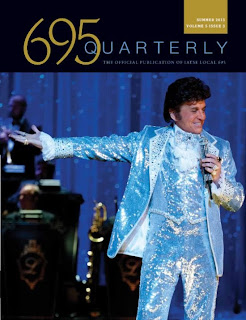 "We hadn’t seen the rehearsal, so we needed to be ready for any possibility. In the tub, Douglas and Damon’s close-ups were shot at the same time so we covered them with two booms. A mirror behind Damon reflected most of the bathroom so we had to work from below and our mikes were almost touching the bath bubbles. Even the camera needed to be wrapped in a towel. The one thing we had in our favor was that the Jacuzzi wasn’t actually running this time."


In the summer issue of 695 Quarterly, boom op Javier M. Hernandez shares some insight about working on Behind The Candelabra, Steven Soderberg's HBO biopic about Liberace. Just reading about some of their challenges (polyester, gold chains, Vegas penthouse aesthetics) is enough to make me sweat rhinestones.

Wind can be the bane of a mixer's existence. Even a gentle breeze across a mic's diaphragm can result in turbulent distortion, sounding less like a pleasant summer day and more like the first stage of a Saturn V rocket during takeoff. 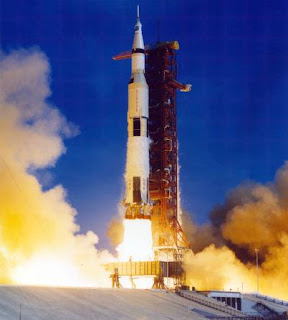 If you're recording out of doors, you need wind protection. The trick to a proper microphone wind shield is the one that lowers the speed of the air around the capsule, while remaining as acoustically transparent as possible. 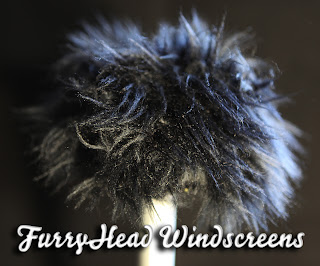 Furryhead makes a series of wind shields to fit a range of products, from mics themselves to portable recorders such as the Zoom H4N, which I used for my test. Their shield is a slip-on with two inch long hair and a bunched collar that makes it look like either a dollar store merkin or Ernie finally lost it and scalped Bert. 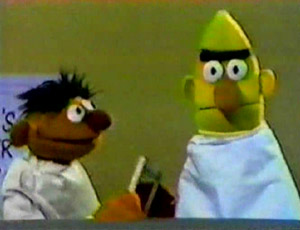 It was only a matter of time.

Cheap jokes aside, it's meant to be used, not looked at, so I took my Zoom with me on a short atmos-gathering walk. I chose the Portland waterfront area, due to its acoustic mix of water, passing traffic, and wind (and because I'm lazy and it's mere minutes away). I set the Zoom for 48 kHz 24 bit WAV files, with the unit's own mics set to the 120 degree pattern.

The first recordings were made about midway across the Hawthorne Bridge, where it was pretty windy. The surface of the car lanes is open steel grating, which makes the tires hum as they drive over. 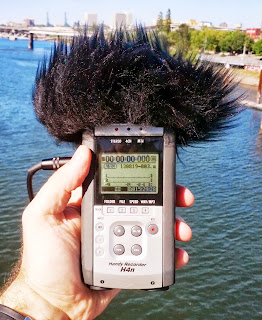 This is the "Don King" version.

First, with the Zoom's own open-cell foam cover:


As you can hear, there's no comparison: the open-cell foam tracks are unusuble, whereas the Furryhead knocked the wind down a considerable amount (the website claims 30 dB). However, it didn't eliminate the noise completely; you can still hear some low rumble on occasion (to be fair, it's all a matter of degree, as there is no completely wind-proof option for any microphone).

The second recordings were made on a pontoon dock just below the Hawthorne Bridge (see? Lazy...). I held the Zoom over the edge where the small waves were splashing against the dock itself.


As there wasn't much wind down on the dock, I wanted to do a rough comparison of how acoustically transparent the Furry was relative to the foam. While I could hear a bit of high-end roll off in my vocal slating (which I edited from the tracks, since I sound like a stilted dork), I didn't really notice much difference in the lapping of the waves. Anything you cover a mic with will alter its frequency response, but losing a little high end (which you could more than likely recover with a some EQ in post) is certainly preferable to the full-on noise storm of wind on the element.

The Furryhead utilizes an elastic band to hold the cover on the Zoom. In practice, it took a little effort to get it situated (mine is new), but certainly isn't going anywhere once it's seated. If you're a journalist and looking to switch back and forth between different covers quickly, this one isn't for you. 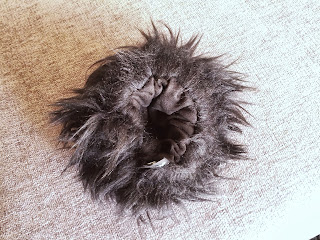 Also, it looks like a Tribble carcass. Them's good eatin'!

At $14.99, The Furryhead is one of the cheaper models out there, but a solid option for smaller recorders like the Zoom.

Cons: seating it takes a little effort, only good against strong breezes, not high winds