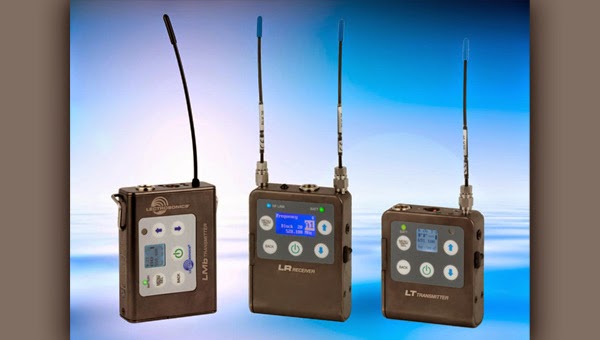 In March 2014, Lectrosonics announced the L Series Wireless systems, essentially a revamp of the L series for affordable wireless systems for use in feeding smaller DSLR cameras. The “L” indicates “Large Bandwidth”, one of the major facets of the revamp being a switch to a wider RF spectrum. What that means is that the tuning hardware now covers three of the existing blocks, rather than one as the current systems do. This is part of an industry wide trend, ostensibly to future-proof our wireless systems as more spectrum is auctioned off either to wireless carriers or set aside for a future “internet of things”. A wide band unit will likely not have to be either re-crystaled or replaced down the line, an attractive selling point in an industry that, like anything tech-driven, is subject to relentless change. Having three blocks available per band means that a mixer has up to 3072 available frequencies, plus a wide enough safety margin that even losing an entire block means you’ll have two more still available.


The new line features the LT transmitter, which is like a more rectangular SMQV. (The L Series also includes the LMb TX, but given that it tops out at 50mW, I decided to only test the LT, as it’s more comparable to the SMQV.) It similarly takes power from two AA batteries, accessible through a sliding side cover, rather than bottom. This brings back the sliding door similar to earlier models powered by 9V batteries. I feel like it saves a few seconds in batt changes, and feels more secure than the threaded latch; no more slightly uneven contact, or over/undertightening of the compartment. With the lack of rounded edges, it’s slightly larger than an SMQV, so if hiding a TX is something critical to your gigs, it’s something to consider. The wire belt clip is now a tension fit, secured in two holes on the sides of the unit. This also saves users from lost tightening screws when removing or replacing the clips.

For certain applications such as sports or live events, the unit features a toggle switch on top of the unit. This can be assigned as a mute switch, power, or talkback with the appropriate RX. For standard uses you can leave it unassigned.

The side panel is home to the menu display screen and a handful of membrane buttons, similar to the SM series. Lectro has now added a dedicated power button, so firing it up is a single long press, rather than two-button affair (the switches can be locked to prevent “butt power downs”).

The menu itself is straightforward, with top-level access to all functions, again negating the need for a two-button press. It features compatibility modes like the rest of the 400 series, enabling it to transmit to a host of receivers, whether from Lectro or other brands (though, not simultaneously. Once you switch into a certain mode, it can only transmit to a receiver that is compatible with that specific mode. This is similar to the other units in the 400 series). The TA5M mic input is the same as the SM series, on top of the unit, adjacent to the SMA antenna mount and the aforementioned function toggle. Next to this are the mic level and power LEDs...

...which brings me to the light show. There’s a whoooole lotta lights happening on the TX, on both the sides and top of the unit, whereas with earlier models is was either the side or the top. They’re very, very bright (to the point that if they’re placed face up on a table in a dark room, you can do shadow puppets on the ceiling. No joke, I actually did this), and while indicators are very useful, they can be distracting, even in a non-narrative shoot environment like a live event.

I broached the subject of a “high, low, off” menu setting for the LEDs (the display screen’s settings have their own menu) to Karl Winkler of Lectro, who said he’d pass it on to the engineers. Yes, you can gaff tape the unit, but then you gunk up your gear. A menu-based adjustment would be cleaner in every sense. 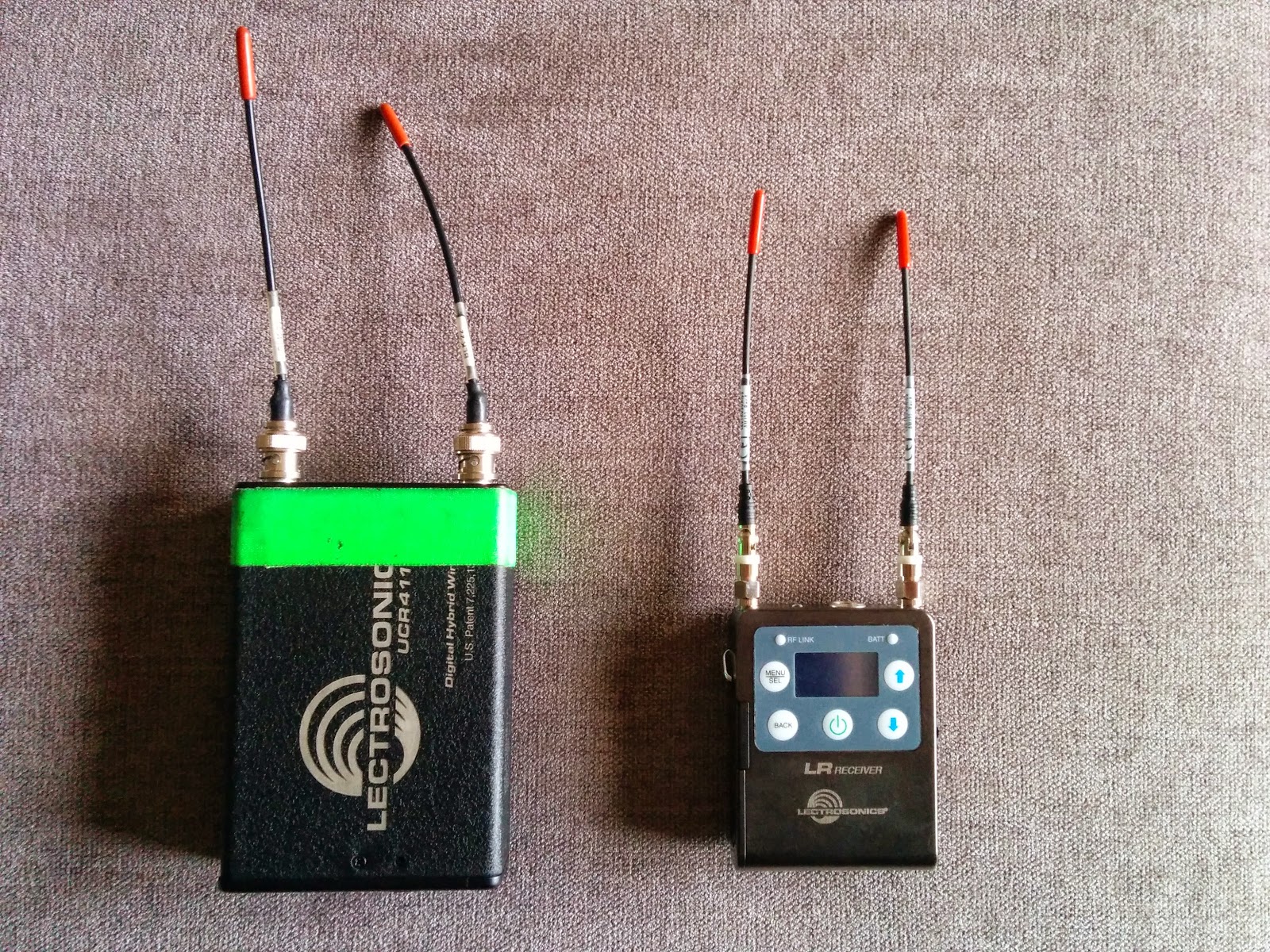 The LR receiver is the more interesting beast here. Slightly taller than the LT, it’s almost half as large as as 411. It features a very similar design to the LT, insofar as its chassis, button pad, belt clip and battery compartment. One welcome addition is the blue RF link LED. If you’re in a hurry, a bright blue light confirms positive reception of the intended TX. The top of the unit differs in that it has dual SMA antenna mounts and a TA3M output. Audio output on the top of the unit means cables running up and then down in a bag setup. Perhaps not a deal breaker, but less clean than running power and audio from the bottom, as with the 411.

One sticking point: with the display screen on the side of the unit, you have no way to read your RXs at a glance without lifting them out of the bag and tilting them. With a couple, it’s not an issue, but with six or more, it becomes untenable.

Lectro says the new unit is intended to serve as a camera hop, where a side display makes more sense. The smaller form factor means that it can easily be mounted on a hot shoe plate on a DSLR without becoming too unwieldy. In a bag situation, however, the top display is far more functional, even more so with multiple units packed together.

I’m assuming the primary question readers are going to have is this: given the lower street price ($2390 for an LT/LR channel versus $3105 for an SMQV/411 channel), how does it perform? I conducted a few walk tests, first with an SMQV, then the LT, both TXs set to 100mW with the same Sanken COS-11. I rigged up the LR to receive the same frequency, and panned it right on my Sound Devices 664, with my 411 panned left, and set levels to match as closely as possible, so that in addition to being able to see their respective RF levels, I could also hear any dropouts in individual ears.

I wired up my intrepid assistant (bribed with a “free lunch”) and had him walk the same route twice, first with the SMQV to establish a basic range, and then the LT. We were set up in an industrial part of town, warehouses beneath an overpass. This meant a lot of metal in the area, in the support structure for the overpass, and in the numerous cars and trucks parked on the street. I set up on the loading dock of a warehouse, and my assistant first walked straight down the block for line-of-sight, and then again to around the corner to test indirect reception.

I got 144 yards line of sight before appreciable dropouts, and around the corner yielded 70 yards (linear, not “as the crow flies”), with essentially equal reception in both receivers. While it’s not exactly scientific, I’m going to go ahead and say that the LR offered identical performance to the 411 in this scenario. The sound quality with all units in Digital Hybrid mode was indistinguishable as well.

Does that make the LR a 411 killer? Nope. It’s a different kind of receiver, one that offers high quality in a smaller form factor, which is not without compromise. Were I setting up a small bag (boom and two wireless), I’d consider the L series. The quality is the same, and the savings is worth having to pop them out of the bag to check the side display screens. But only for a small bag, as yanking out a handful of RXs throughout a shoot day feels impractical.

In some ways, the L series feels like a reaction to the Sennheiser G series, in form factor and intent. The G3s also offer a top function switch and IR syncing between the RX and TX. The Lectros, though, far exceed the Sennheisers in terms of quality and performance. It’s more like Sennheisers are scratch track wireless that can be pressed into service as a lav mic, whereas the L series is a full quality lav mic that is small enough to be used for a scratch track. The Digital Hybrid fidelity is entirely overkill when you’re feeding a DSLR via a minijack.