Han Solo wasn’t. Not technically. While his last name may have been a super-obvious indicator of his initial world view, he was always accompanied by Chewie, his trusty, hairy cohort. No matter how good a pilot, no matter how savvy a smuggler, he didn’t go it alone.

And neither should sound. 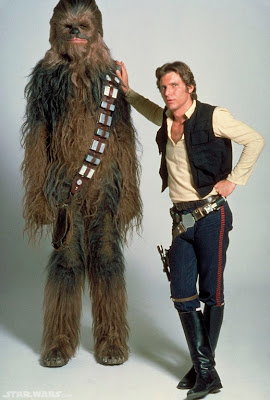 The most badass room tone ever.

There’s been a recent spate of projects that have demanded that a single person wire, boom, mix and record. Is it technically possible for one person to do all of this? Of course; it’s de rigeur in documentary and reality television production. Which is where it should remain.

“Multitasking” has been debunked as a myth. Having a single person doing multiple tasks means that that person is doing each task less well. In certain applications, this will produce acceptable results. In the aforementioned arenas, the audience has a lower expectation of quality, and a higher tolerance for the compromises innate in such productions. We don’t expect House Hunters to sound as clean and dramatic as a movie, and that’s perfectly fine, for House Hunters. A feature film, “indie” or otherwise, deserves better.

A single person department will be pulled in multiple directions at once. A single person won’t be able to wire that one picky actor in advance so that production won’t have to wait. A single person booming properly won’t be able to look down into the audio bag to keep an eye on levels, or be able to keep two hands free to adjust said levels should there be an issue. A boom operator strapped into a twenty- or thirty-pound bag won’t be as nimble or precise when booming a complex dialog scene, dodging lights, staying out of frame, keeping talent on-mic, all while occasionally walking backwards without falling over grip gear.

For a quick indicator of how to adequately book your crew, look no further than behind the camera and take a head count. Is there one person acting as DP, operator, 1st AC and 2nd AC? On reality TV and documentaries, yes, and that’s perfectly fine for those genres. But if your film isn’t the kind of production where there’s a single person camera department, then it also isn’t the kind of production that should have a single person sound department. Sure, your DP can do it all solo, but the quality will be compromised, and your feature will look like The Real Housewives of The Jersey Shore Who Are Also Pawn Stars:

Occasionally, production will trot out the ol’ “But the last person could do it” justification, to which I say: if the last person could give you what you need in the way that you need it, then that person is worth his/her weight in pyrite. If that mixer actually exists, then why are you talking to me? Either that person wised up and said “no thank you” this time around, or they’re booked on something that pays better and you’re not willing to meet their rate. While I know that there are some mixers who operate this way, the majority of the time this gets said, production is using the “mythical mixer” as a negotiating tactic. I don’t begrudge trying to save money; business is business. But don't compromise your project out of the gate. Whatever pennies you think you're saving now you will end up spending in the form of dollars to fix sound in post. ADR and high-quality clean-up filters are still expensive, even today.

Belts are being tightened across the board. The fact that this is even requested is merely a symptom of contracting budgets. But the fact that it actually happens on set is our fault as mixers. When we say yes to this, we’re not being “team players”, or whatever euphemism production is using when they try to convince us to do this. We’re racing each other to the bottom, where we can’t earn a living or afford to maintain gear, because we’ve shown that we’re willing to do the work of at least two people for less than the price of one.