Nerd Is the Word

Beyond being a sound mixer, I am an unrepentant film nerd. My tastes range from big-budget spectacle to experimental indie dramas; often I describe my primary filmmaking influences as "the two 'Bergs: Spielberg and Soderbergh".

As noted previously, I also have a thing for outmoded media technology. Recently, the three met in a planet-melting trifecta when Steven Soderbergh came to a roadshow screening of Che at Cinema 21 here in Portland. There was a Q & A after, where he fielded questions ranging from the political to the technical (this being one of the first full-length features shot on the RED). 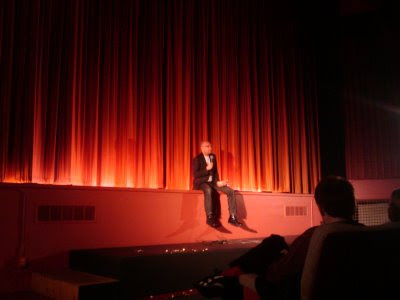 Sitting down on the job: Soderbergh braves the crowd of cinema hipsters.
Beforehand, though, I was able to spy Mr. Soderbergh on the street, as he gamely and patiently signed autographs. Thinking there might a chance for a signature, I'd brought my Criterion Collection laserdisc of sex, lies and videotape. Soderbergh, eyebrows raised, held the box for a moment before noting, "There are things on here you can't get anywhere else."

Sadly, he's right. As technology continues its relentless forward march, occasionally there are extra materials (either from licensing issues, or worse, market disinterest) that aren't ported over to the newer formats. The CC laser contains a deleted scene; '89-era interviews with Soderbergh; and the script (which is also available in a wonderful book). But the most interesting is a black and white 16mm short film, entitled Winston. I always find a filmmaker's early works fascinating, as you generally find the seeds of certain visual or narrative themes that recur throughout the rest of their career.

Now, with more Soderbergh!
So, yeah, that's a particular favorite of mine. And while I'm not usually one for autographs, this one is pretty near and dear to my geeky little heart. (After he signed it, he quipped, "There. Now it's worth ten dollars.")

This post made me very happy. I can't believe I've still never seen this movie, either. Netflixing it right now...