Einstein Was Probably One Of Them

Remember that scene in Close Encounters of the Third Kind? When all those people that had been missing, some for more than thirty years, and then suddenly they're returned by the "benevolent" aliens who had forcibly abducted them, and they're dazed and disoriented, and they have, like, all of this catching up to do, having been gone, and out of touch, and waaaay out of town, for the aforementioned thirty years? Remember? With the Carlo Rimbaldi puppets and the sunglasses and the swelling music score and Lance Henriksen in a non-speaking role as one of the government agents?

So, yeah, I'm back. Besides the rather trying task of finishing up the post mix on Everyman's War (why did I choose a war movie as my first feature-length post project?), I also took on another feature as Production Sound Mixer. My second full feature, Golf in the Kingdom was shot on location at the Bandon Dunes Golf Resort on the coast of Oregon. Caddyshack quotes abounded, as did the unpredictable weather. We were pounded by wind and rain and by the occasional errant golf ball, but we survived. 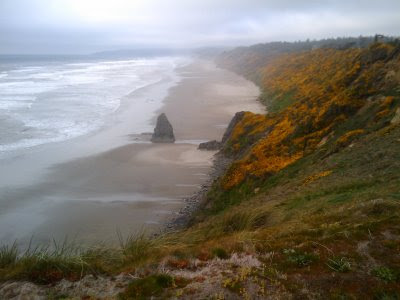 The temperamental Oregon coastal weather...
The movie was shot on the RED ONE, so we opted for double system with dumb slates. We rolled a Sound Devices 744t in a triple mirroring mode, which meant that we were always recording audio to three places: the internal hard drive, the internal compact flash, and an external bus-powered Lacie Rugged firewire drive. At the end of each day, I would make an archival back up to DVD-R, then hand the Lacie over to DIT Sean Rawls. Sean would then do a drag'n'drop of the day's audio onto the same hard drive as the picture files, and then ship that drive to post. After a few discussions with the DP and post, it was decided that we would shoot and cut at 23.976 frames per second, and then pull up the entire film to 24 frames at the DI stage. This meant that we would keep our sample rate at 48 khz, since the frame rate wouldn't change between shooting and cutting.

Boom swinging was shared between Creed Spencer and Eric Goldstein. We employed a smorgasbord of mics, dependent on gear availability (low-budget show) and the needs of the scene. Exteriors were handled by Neumann KMR-81 and Sennheiser 416 short shotguns; wireless duties were split between Lectrosonic 200s, 187s, and Sennheiser G-2s. Sanken COS-11 and Countryman EMW and B3 lavs fed the wireless. Considering the fact that we would be traipsing across open golf courses, I bought a beefier cart for the show: the Rock N Roller Multicart with a top shelf option and pneumatic tires. While it lacks the lip of a Magliner (convenient for attaching clamps for hanging cables), we made do, and the cart got us where we needed to go. 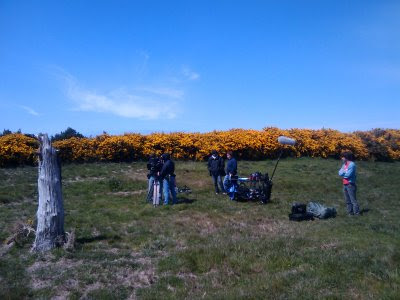 A camera, a cart and a stump

This was my first film gig with name talent. Being professional about that sort of thing means minding your manners and simply going about your business, which I managed to do for the most part. But, at one point, I had my head buried in the cart trying to work out a technical issue, and Malcolm MacDowell completely ambushed me by politely introducing himself, causing my brain to completely blank itself like a shaken Etch-a-Sketch. I finally muttered, "Hello, my name's Christian," to which he replied, "Are you sure?" My boom op found it a lot funnier than I did. 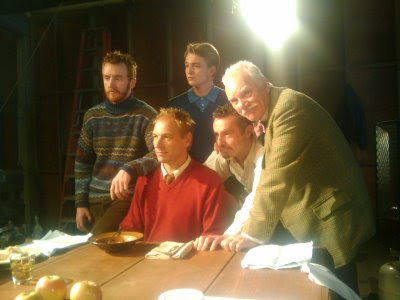 At any rate, I'm back, and will be posting more consistently, though I ask you to bear with the first few, which will involve a lot of not-so-news as I clear my "to be blogged" folder.