Still alive, sports fans. For the past few weeks, I've been up to my neck in a post project, doing the sound mix on the WWII film Everyman's War. I have to say, it's been interesting to do post work on my own production tracks. I firmly believe that knowing post can make you better in the field.

This is my first post mix for a full length feature, as well as my first 5.1 mix. I'm running Soundtrack Pro, and despite the occasional quirks, it's been handling things rather well. A full post-mortem of my travails will be forthcoming.

I'm solo on this one, doing the work of what is typically a department of two or three people. This has made for long days and weekends spent in the post cave, with little time to devote to other things, like writing this blog and turning 35. And dealing with writing things like "I just turned 35...". {new demographic sigh}

But, this being a tech/nerd blog rather than the typical public diary, I will spare you the nitty gritties about what I'm wearing, eating, listening to, etc. (that's what my neglected Twitter feed is for...ostensibly), and dive right in to a recap of things that happened that you probably already know about, but I feel deserve mention anyway.

First up, a couple of updates from yonder Trew Audio: 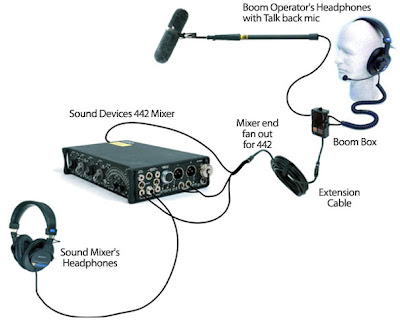 Now, even 442 users can gossip and talk smack about those pesky "actors".
Next, another installment of Trew Audio Flow, with Glen Trew taking the reins himself with a missive entitled Yes, We Should EQ On Set. Snip:

Many production sound mixers are reluctant (afraid) to use their EQ. Often, this stems from indoctrination early in their careers by discussions with post production mixers. “Don’t turn the EQ knobs… I’ll do that stuff later” (read this again with reverb added for effect). But the fact is that under-EQ-ing (not using the EQ controls enough) is an improper use of EQ every bit as much as over-EQ-ing is. If there is any use for a Sound Mixer’s fear of the EQ controls on their equipment, it is to motivate the Mixer to be as mindful of not using the controls enough as they are of using them too much.

Having been on both sides of the fence, I tend to agree that really heavy EQ/mixing should happen later, in an acoustically treated environment, away from the heat of battle. Of course, I've never done post work with tracks provided by someone with Mr. Trew's years of experience, either; I'm sure I'd probably amend my opinion after such a project.

At any rate, this is how I roll (literal zing!) in the field: I high pass most everything at around 80 Hz to do away with any residual boom rumble or to ameliorate the "chestiness" inherent in lav mics (due to proximity effect and placement), but that's about it. They keep hiring me, so I must be doing something right. Maybe it's my minty fresh breath...

Speaking of post, they recently announced the winners of the Sonopedia Sound Design Competition. To recap:

In November 2008, Post Magazine and Blastwave FX teamed up to sponser the first SONOPEDIA Sound Design Competition. The challenge was to create a 30 second sound design narrative using any of the 40 sound effects that was available to download free from Blastwave FX. The winner received SONOPEDIA™ - 20,000 HD sound effects on a 250 GB Glyph hard drive. The competition was judged by Academy Award winners Richard King, Randy Thom, and Lon Bender.

Yours truly made it into the top 20 (apparently, bribery is still quite effective). Here's my entry, entitled UFO Factory Tour:

Cool thoughts about post and location sound. I used to do location sound for shorts and independents that I would later do sound design and post on. Now, strangely, though I teach location sound at NYU grad film, I focus on post production. My current project is one I recorded location sound for over a year ago, and thank goodness I took detailed sound reports- it came in very handy when looking through the DATs for alt takes.

Oh, I also am a part of the Blastwave FX team, so nice to see you made it to the top twenty.

We went to DAT for this film as well (PD-4), and while the machine performed flawlessly, just the occasional instance where I have to go back to tape to re-transfer something (after all these years, still dealing with people who accidentally fold split tracks down to dual mono....grrrrr), has made me appreciate solid state media so much more.

As for field/post, I've generally made my living doing production, but post has been picking up lately, and I hope to do both in parallel.