Laserdisc Is Dead As Disco; Beta and 8-Track Both Send Regards Via Western Telegram

As an unrepentant film nerd, I have to say I'm a bit sad to hear it said aloud: Pioneer recently announced that they would officially end production of laserdisc players.

Laserdisc has always has a special place in my heart. For a considerable time, it was the highest quality consumer video format available. It offered about 400 lines of resolution (roughly double that of VHS), increased color bandwidth, and due to being an optical format, didn't wear out with repeated viewings. Here, let's let Devo (!) explain it better for us:

BTW:WTF?
Later in its life cycle, laserdisc came to be the first consumer video format to offer digital sound, initially in the form of two 44.1 kHz, 16 bit PCM tracks, and later 5.1 surround sound via Dolby Digital and D.T.S. Finally, the home viewer could enjoy near printmaster quality audio in their home theater.

Due to its increased visual quality, there emerged a market for remastering old video transfers of classic films. Boutique companies like Criterion sprang up, raising the bar for home video releases by insisting on letterboxing to achieve proper aspect ratios, finding and offering other content like outtakes and deleted scenes as "extras", and utilizing the spare analog audio channels to offer running commentaries on the movies themselves. Essentially, everything that we've come to take for granted on DVD and now Blu-Ray was introduced first on laserdisc.

Laserdiscs always kind of felt like the vinyl of video. It shared the same 12" form factor, allowing for bigger cover art, as well as a more satisfying tactile experience; when you hold a movie on laser, it has a heft and solidity. It just feels a little more special.

Boxsets were something to behold. They were called "coffee table editions", being about the same size as a large photo book. Since everyday consumers weren't their target market, studios could take more care with the production of their boxsets, packing them with material to appeal to die-hard aficianados. One of the best I've seen is Universal's Jaws: Signature Collection, released in 1995. It addtion to a remastered transfer of the film, it included a new 2 hour documentary, a CD of the soundtrack, and a paperback copy of the novel. 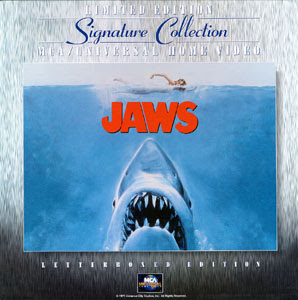 Now Jaws-ier than ever!
Lasers never enjoyed the success in the US and Europe that they did in Japan. You couldn't record to blanks to time-shift TV like you could with Beta and later VHS. Consequently, prices for both players and discs never fell from premium levels.

Enter DVD. Despite being compressed, it offered a component signal, eliminating the decoding artifacts that plague composite formats like VHS, Beta and laserdisc, as well as anamorphic video, allowing it take advantage of widescreen displays that were starting to appear in the marketplace. (Laserdisc actually offered anamorphic video first, in the form of "squeeze LDs", which never caught on in the states). DVD was smaller, lighter, cheaper; it was also digital, which was fast becoming market-speak for "better".

Most will tell you that an analog, standard definition format could never hold a candle to a digital high-def one (even though laserdiscs were the first platform to offer a high-def video format to consumers, in a variant known as MUSE Hi-Vision that was sold in Japan). They're most likely right, but the home video market wouldn't exist as we know it today without lasers. The extra quality set the bar higher than VHS, and brought the enhanced viewing experiences of widescreen, surround sound, and archival extras to the homes of film fans for the first time. 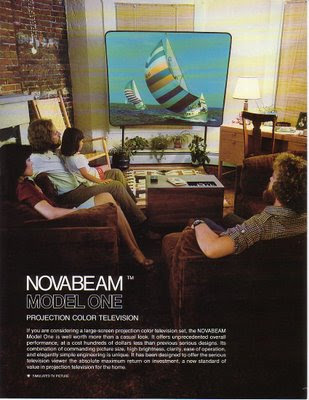 Music and theatre have always had a close relationship. Musical theatre is a form of theatre combining music, songs, dance routines, and spoken dialogue. Modern musical theatre emerged from the variety, vaudeville, and music hall genres of the late 19th and early 20th century. Musical theatre includes spectacle as well.