The D Stands For Depressing

Sonicpool Post has, for some reason, developed and released a free iOs app called Guerrilla ADR, which, according to the press release, “gives talent the ability to download the...app, put on a pair of headphones and record their ADR lines in sync with picture. They can preview a video clip of the line along with a text description of the line below it." 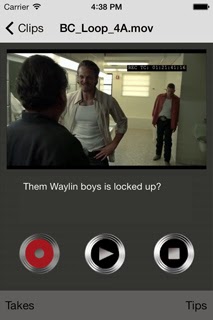 Hopefully the next version has an undershirt filter.


Where to begin...[sips coffee, grinds teeth]

Feedback. Placing an actor in charge of their own session without live direction will more than likely result in more notes and more re-takes. More time=more money.

The environment. Unless the actor has their own VO booth (or even a well-stocked walk-in closet), the background will be less-than-ideal at best, and a complete cluster at worst. This is a even more vexing when you consider that they’re likely doing ADR because the background was too noisy to begin with.

Finally, the mic. By design, it’s intended to be used for telephone calls. Because it’s a telephone. That’s kind of, you know, what’s it meant to be, and all.

Unless this is intended to record temp tracks as placeholders for the edit, I can’t see this being useful in a professional capacity. Unless, of course, the idea is that they encourage clients to use this to “save money”, then end up charging OT to fix the tracks because the talent gave them poor-quality deliverables. In which case, JEANYUS.

Link to the PR.